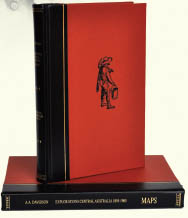 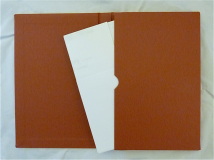 Journal of Explorations in Central Australia - out of series Deluxe

Mining engineer Allan Davidson’s readable account of his explorations discovering gold at Tanami and The Granites.

Davidson is one of Australia´s least-known inland explorers, yet his two expeditions north of Alice Springs yielded, as fellow explorer Charles Winnecke writes, `a very material contribution to the topography and geology of a space hitherto blank in the map of Australia´. He discovered indications of gold at Tanami and The Granites which led to the later development of the gold mines there.

Valmai Hankel´s introduction reveals for the first time details of Davidson's busy and adventurous life, and includes the first photographs of him to be published.

Trained in surveying, metallurgy and mining engineering, Davidson wrote a daily journal which is important as a geological description of the territory he covered. In an entrancing narrative style he has written a lively and at times amusing tale of his experiences.

The only previous version of this important journal appeared as a parliamentary paper in 1905. The text has now been reset, in keeping with the other titles in the Friends´ Australian Parliamentary Editions series, and the publication includes superb coloured topographical and geological charts in a matching case.

'out of series' Deluxe - bound in black quarter leather with red cloth boards decorated in front and gold marker ribbon, with a separate map box in matching binding.