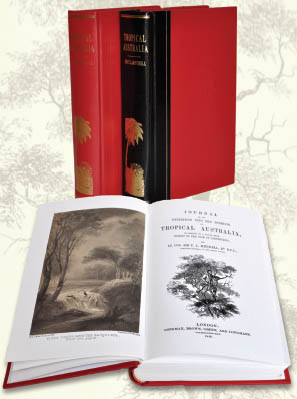 Journal of an Expedition into the Interior of Tropical Australia

Sir Thomas Livingston Mitchell was one of the most controversial and enigmatic of Australian explorers. Born in Scotland in 1792, he arrived in Sydney in 1827 having accepted the position of Assistant Surveyor-General in New South Wales.

Between 1831 and 1846 he led four expeditions – all investigating the country´s river systems, including his best known exploration into Victoria, through what he called Australia Felix.

In his last expedition he endeavoured to find a route from Sydney to Port Essington. Equipped with boats, in the event of finding the long-sought great river flowing to the north coast, Mitchell set out in December 1845.

Harried by heat and water shortages, he pushed slowly north, discovering the rich Fitz Roy Downs, but was increasingly disappointed as rivers trended in the wrong direction. Finally Mitchell reached the Barcoo River, which he named the Victoria and which was later discovered to be the same as Charles Sturt´s Cooper´s Creek. Disappointed of finding a viable route, Mitchell was forced to return because of diminishing stores.

Mitchell died some nine years later of pneumonia contracted while surveying. Contentious till the end, he has the distinction of bestowing more names on the Australian landscape than any other explorer.