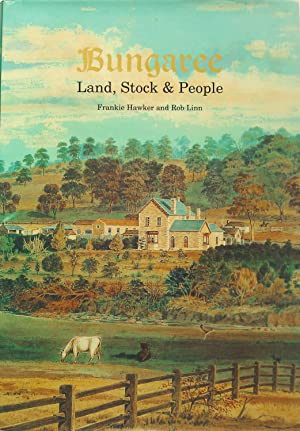 “Bungaree is situated 180 kilometres north of Adelaide, not far from the Clare Valley, the famed wine region of South Australia.

The authors, Frankie Hawker and Rob Linn, give us, as readers, a detailed account of Bungaree from its foundation to the present.

The growth of Bungaree follows closely the rise of George Hawker’s own career. The story records his problems as well as his successes. He became a famous South Australian, contributing much to politics and the community. Through judicious management, Bungaree became part of a large pastoral empire. When George Hawker died in 1895, the property came under a partnership of all his sons. IN 1906, the partnership was dissolved and Bungaree split into six sections. Right up to the present day, the name Bungaree has been synonymous with the Hawkers and with fine sheep. The various branches of the Hawker family have, throughout the years, served the community as did their forefathers. They also helped in the evolution of the modern Australian Merino and in other innovative areas of agriculture.

Bungaree – Land, Stock & People is a record of one family’s role in shaping part of Australia. It is an enthralling adventure and a lively, easy-reading account… a microcosm of rural Australia’s history.”